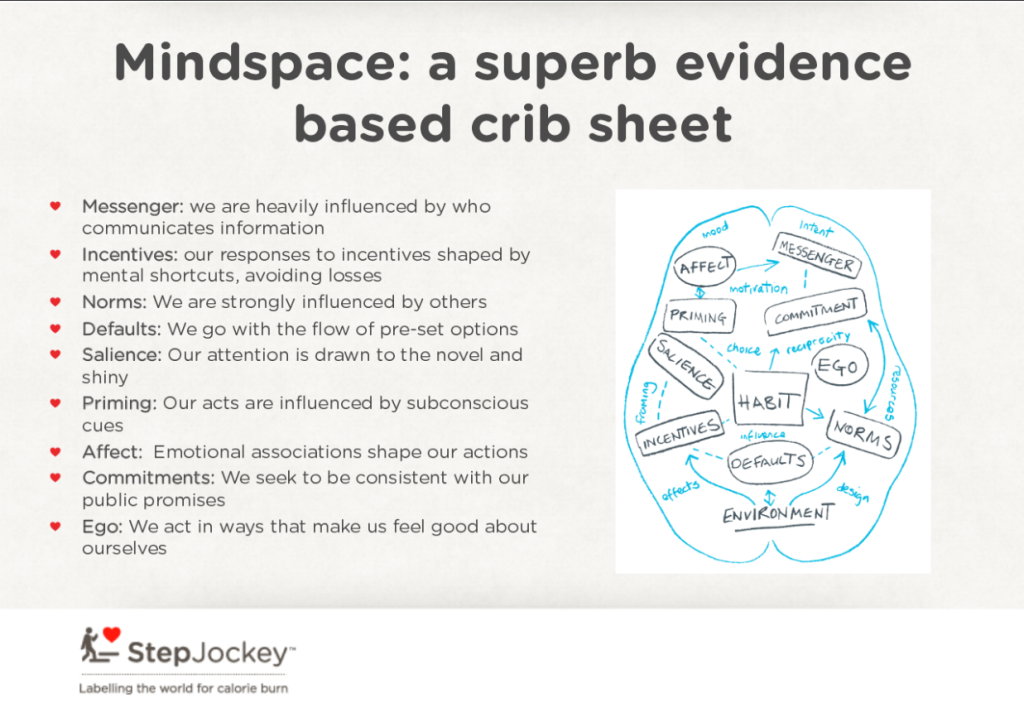 It is week three of my internship. I am currently working from home because Pete is out of office, attending gamification related events. I would like to spend this week talking about the Gamification meet up that Pete and Lizzie Sanders organised. The event was held in Brighton on the 28th of October. The event focused on gamifying sports related goods and activities. The event was sponsored by PosturePeople.

The first speaker in the event was Peter Watt, from SESAME (Centre for Sport & Exercise Science & Medicine). His speech was titled “Losing the weight or the weighing”. He was essentially saying that losing weight, or setting a target weight, should not be a goal or objective in itself, and exercise should be done for the purpose of staying fit rather than losing weight.

The first point, regarding weight, was an interesting one. He stated that many people see ‘three pounds lost this week’ for example, as a success, when in reality, losing weight is a far more complicated issue. This is as you can lose weight in good and bad ways. Starving yourself of proper nutrients by not eating may allow you to lose a few pounds, but it is very unhealthy for your body. The way you should look at losing weight is by eating properly. Although Peter suggested that losing weight shouldn’t be in itself a goal at all, which brings me to his second point.

Exercise should be done for the purpose of staying healthy, and as a result you may lose weight, if combined with a proper diet. So why is this an issue? Peter stated that evidence suggests that our diets and caloric intake hasn’t really changed since the 70’s, but the amount of sedentary things that we do has risen dramatically. The average household ownership of cars has dramatically increased, for example. Alongside this, only 35.8% of people above 16 participate in ‘hard’ activity at least once a week. As a result of this, by 2060, the average life expectancy of a man is estimated to decrease by half a year. This is hard hitting considering life expectancy has steadily risen since the invention of modern medicine.

Overall, this talk was a very good foundation for the rest of the talks, as it established the basis of where we are as a society. Peter’s talk made a lot of sense to me. My father made a conscious decision to eat a far more sustainable diet and exercise more. As a result he lost over 9 stone in a year. What Peter said confirmed the path that my father took as the correct path.

The second speaker was Khody Damestani, Head of Product Development at mymaxme.net & Lecturer in behaviour change and peak performance at Surrey University. His talk focused on building mental strength. The basis of Khody’s speech was they believe that there is too much emphasis on the prescription of exercise and nutrition plans and not enough on how to build the mental strength required to adhere to these actions. Khody’s team are tackling this problem head on by building a personalised digital solution that helps users build the mental strength required to adopt and maintain a range of healthy behaviours.

The digital solution is called MyMindPal. This mobile app focuses on ‘making people happier’ by giving them a personalised behavioural buddy. This will help them reach their goals by assessing their mental strength in five different areas and giving them gamified tasks to do to improve these areas. The USP of this app is that it is personalised, making it unique to each user on what tasks they need to complete and why. I enjoyed this talk and found MyMindPal to be an incredible idea. Mental strength often gets overlooked by physical strength when it comes to wellbeing and exercise. However, mental strength is as important, if not more important as it is the basis of everything you do. You will not go to the gym, for example, if you were too demotivated or too self-conscious to go. This application looks at resolving these issues.

The third talk was by Paul Nuki, CEO of StepJockey. His talk was on “Gamification in health: how to engage and motivate”, which talked on the opportunities and pitfalls of gamification in the digital health space. His key points were:
• Salience: the art of reaching the majority, not just the already fit minority
• Understanding the blockers to uptake: skills, time, self-conciousness
• Prizes for all: Unpicking personal motivators and applying them individually
• Beware the A-Team: how to deal with the streak-aheads 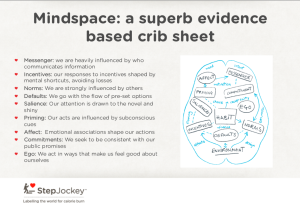 The most interesting part of this talk was the use of the ‘mindspace’. All information that can be seen in this screenshot taken from his slides.

Another key point from his talk was around fitness ‘blockers’. These are skills related or time related blockers which stop people from hitting the gym or going on that evening run. This links with Paul’s idea of Salience. The easiest way to get everyone involved is to build it into their everyday lives. Paul’s gamified app, StepJockey, has spread to over 90 businesses which essentially makes people take the stairs instead of the lift to work. It is gamified because it features competitive leader boards which tier so people do not get demotivated. It also incentivises through rewards, preferably physical, tangible rewards such as money. I found Paul’s talk the most informative of the talks, and I can envision StepJockey having a successful future.

The next talk was held by Toby Beresford, CEO of Rise Global, considering ‘Personal Dashboards’. Toby states: “There’s more to designing a personal dashboard for employees, brand ambassadors or customers than you might think. These 5 simple questions will lead to the right outcome, better gamification design and ultimately a better, more actionable dashboard. Whether you’re targeting the CEO or the new graduate, creating simple, accurate and relevant dashboards can drive greater engagement, productivity and performance as people see what needs to be done and how they are performing.” The five questions were as follows:

I highly recommend looking at Toby’s presentation online as it is quite detailed. The key point I gained from his talk is that score design is very important. Specifically, if you can design a score to show as little as possible, it will be more effective. In essence, if you are flooded with too much information on one page, people will switch off, or simply not have the time to read them. By condensing these scores into one complex metric, it is easy to distribute, understand and allows peer comparison.

The final talk was taken by Kelvin Newman, organiser of Brighton SEO and founder of Rough Agenda. His talk was titled ‘Love/Hate/Gamify’. Kelvin’s summary is as follows: “We all know wearable tech promises so much for health and fitness. This talk will explore the love hate relationship that I’ve developed with my Fitbit and how despite its best intentions it still has to deal with irrational users.”

I found Kelvin to be a relaxed ending to the night. His speech was a more informal, personal and emotionally charged talk which outlined irrationality. In his comical tone, he suggested that whilst the Fitbit was an amazing device that will help people reach their goals, and there has never been a device that will help you achieve their goals so easily, it can run into problems. The problem being the irrational user. Even with someone like Kelvin who wants to get fitter, he still finds himself not wearing the device and makes excuses as to why this is. He ultimately knows they are excuses, but he uses the excuses anyway. People are irrational, and this can be a barrier in the gamified world that needs to be overcome.

For reference, all the slides can be found here: http://www.meetup.com/Brighton-Gamification-Meetup/events/225063072/