How To Gamify A Conference – Part 2

In part 1 we found out about the conference, the previous conference game and how we redesigned the game in 2016. In part 2 we reveal the results and provide a juicy list of 10 recommendations for building conference games!

Results in 2016 based on the original objectives

#1. Increase audience engagement at the conference

Result: We trended 2nd in the UK on Twitter, just after #PMQs, on the first day of the conference. The only downside to this was that the hashtag was heavily spammed.

Participation in the game was measured by the number of people who received a participation badge (53 people). The measured commitment amounted to a 41% engagement rate across all delegates, exhibitors, organisers and speakers at the event. This was a 17% increase over the 2015 game. Of those awarded participation badges, 53% were male and 48% were female.

Result: although there do not seem to have been any examples of direct adoption after the event, there were some great blog posts written up about the experience of participating in the game. The fact that participants took the time to write about it is always a good sign.

Result: the artefacts that the teams created, including a padlet board, a Twitter account for their avatar, and a web comic, stand as a testament to the fact that a conference can be used as a time to actively participate in problem solving and collaboration. The game also undoubtedly encouraged attendees to talk with others in their assigned team. Perhaps even branching beyond people they already knew.

I felt that the middle of the narrative lagged a little bit, and we could have done with an explanation in the storyline as to why we were zeroing out the points on the second day, in addition to the actual reason we did that. I think that it affected the momentum of the game. However, a lag in interest is to be expected after the initial peak and as the day runs its course.

We included caps on our Twitter scoring, but even that was not enough. The main realisation that we had, was that Twitter itself is really a game. Because of this, as we had some highly influential Twitter users in our midst, they were winning from the get-go as their Tweets had automatic impact and influence. These interactions therefore garnered more retweets, etc. Although I personally will not rule out Twitter as a scoring metric in a future game, I would make relevant caps very low, and would not allow unlimited scoring for Tweets. I would work it into the game somehow, that each tweet had to be savoured, as scoring would be limited. We did attempt to mitigate serial tweeting for points alone, but it still occurred, as competition became more fierce. In future I would place more points emphasis on the in-person elements, such as the introspective zone and the digital story creation.

Many of our grand plans around using the leaderboard were derailed by the venue’s Wi-Fi which ceased to operate during the first day. The leaderboard looked great, but we were unable to score things effectively or release updates in a timely manner. I attempted to enter manual scores using a flakey 3G stick, and this didn’t go well. To mitigate this, I would certainly advise setting automatic timed polls and releases while one has a stable internet connection, and then if the venue has issues, that will not affect the game as much. In this instance I would recommend keeping the manual scores as a separate spreadsheet and verbally praising those scores, while explaining how they would affect the leaderboard. It is easy to get too tied up in the leaderboard and to lose sight of celebrating the activities of the players in your game. Let the leaderboard do its thing ‘automagically’ and then you can focus on the stuff that really matters. 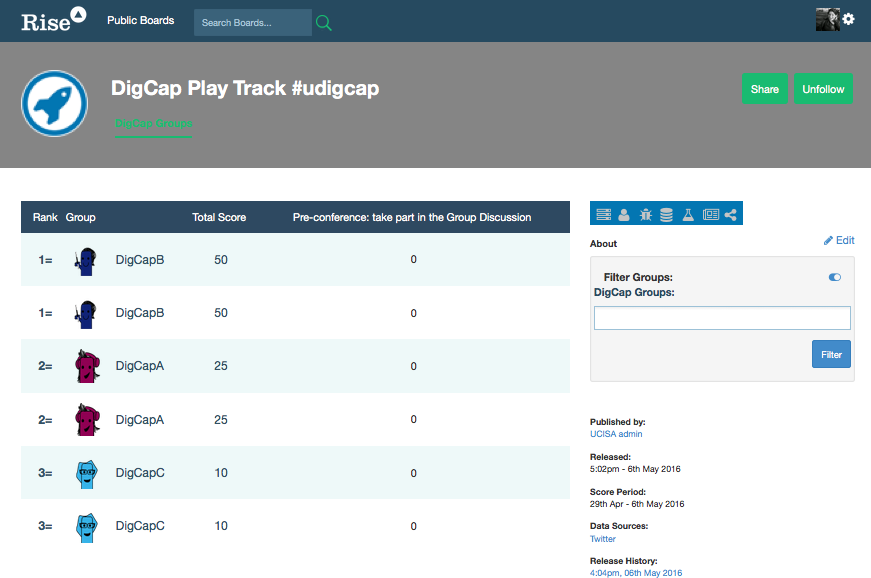 Technology - too many platforms and too many metrics

We did make continual efforts to simplify the game, but based on the final feedback, some still perceived it as too complex. A point well heeded. It is certainly a tricky balance, offering enough challenge to stoke interest, but making it easy enough so as not to deter participants. I think that I would reduce the number of technology platforms and also minimise the list of scoring metrics in future. As it was a technology conference, we felt the need to challenge ourselves as gamemakers and be trailblazers with new technologies. As a result, things did not always go according to plan. The iBeacon for the introspective zone was one such instance of this, and unfortunately it was quite buggy. Thankfully, we were able to score people’s photos that they took in the introspective zone, showing their activities such as using VR goggles or completing a bespoke algorithmically created jigsaw puzzle!

Space (venue space and break out space) and time

Games need space and time. We did allocate time to the game’s leaderboard releases in the conference schedule, but in fact we could have done with some open times when participants could mingle and consider how they might compete the activities. Also, there was not really enough space at the venue to allow the mingling to occur. Deputising keen participants from the previous year’s game worked better than assigning conference organisers as team leaders as they were understandably too busy.

1. Handle sign-ups in-person so that participants can ask questions about the game and commitment will have greater assurance.

2. The opt-in to the game needs to be harder and could perhaps be a mini game. Players need to be serious (lackluster players, unfortunately, make it really hard for teams to work).

3. Game onboarding (learning) can be tricky: in future I would handle sign-up in-person, as outlined above, but still have a webinar beforehand to stoke interest. The videos worked really well, and got a good number of views.

4. Communications: I would drip feed in future via text messaging, slack, or via a WordPress game site with email subscription. Text messaging is my preference though as it feels very personalized. There is too much noise on Twitter to make it very effective for communicating with players.

5. Know your audience: analysis of the data from the previous conference made a big difference. Also the pre-conference survey question was helpful to find out what folks were interested in.

stick to consistent game branding, we had a colour scheme derived from the conference venue and this was used both for the avatars and instructional documents.

1. Show and tell: the creation of digital artefacts was a successful venture in terms of problem solving and collaboration. I think that more self-reporting in the game, through a structured communication channel would work better.

2. Rewards are good, recognition was better, surprise was even better! Chocolate medals in tandem with the final recognition video went down very well.

3. Technology: asking folks to install apps or sign-up for a service can be a hard sell. Padlet is a nice option as it does not require login for collaboration and you could certainly do something with a public Google doc. I find myself more inclined towards a tool like Slack which allows for multiple channels and can be locked down to invite only. That way the game discussion/scoring channels can operate alongside a main conference channel and it is a controlled environment without general traffic and spammers.

4. Have a true Play-Track: this did not apply to the DCG conference as it did not have conference tracks (“track” was in the name of the game to indicate that it was an immersive journey). For conferences that do have tracks, I advise that you need to have the courage to have an actual play track which is every bit as important as any other conference track. Also consider how your programme affects game-play, there should be times that are game-free, but equally your game participants should not be forced to choose between attending a keynote or playing your game. Synchronous gaming throughout the proceedings can lead to cognitive overload and participant fatigue.

Give the game room to breathe and worry less about schedule dead space, that is where your game can live. Remember that participants are actively solving problems as part of the game and that there is value in that. Celebrate these doers who create information, as well as those who attend to consume information.

For more pictures and Tweets from the event check out my Storify: https://storify.com/fmacneill/ucisa-spotlight-on-digital-capabilities-game-highl

Special thanks to:
Farzana Latif, Fiona Strawbridge and the UCISA DCG conference committee, the game participants. Also a big thank you to Pete Jenkins for his willingness to be a sounding board and for his mentorship during the construction of the 2016 game.