Gamification Case Study: Save The Park 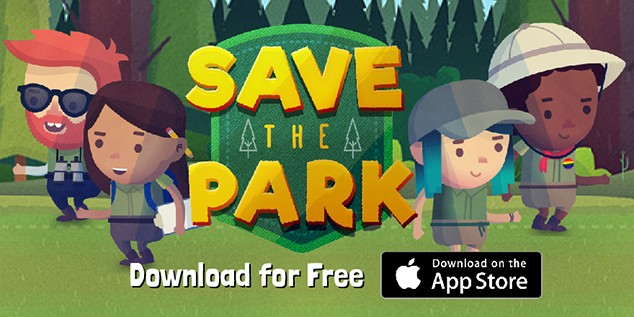 Today I want to talk about another gamification case study called Save the Park. As we know, all gamification projects try to solve a problem in the real world. The problem in that case is that the National Parks Foundation, an organisation that strives to preserve national heritage parks in the United States, lacks money and volunteers to do so.

Save the park is a game for iPhone that was built by Schell Games and produced by Games for Change while funded by American Express. All of these organisations came together for a good cause that was to motivate people to volunteer more and help preserve the national parks in the United States. American Express also offered to donate $1 for every download of the app up to 50,000 downloads.

In Save the Park players learn about the national parks through in game fun facts and then they connect to the NPS.gov site to explore volunteering opportunities in their area. The character you play in the game is that of a park volunteer and experience the conservation activities that support the U.S. national parks.

Aim of the game is not only to educate and inform people about the problem but motivate them to participate in solving it. I really like gamification projects where the designers try to solve the problem holistically and not just one aspect of it. Looking after nature and national parks is something that people first need to understand we need to do which means educating and informing and then they need to act according to that knowledge they got.

The game is a runner-style game that you get to run through different park environments like forest, desert and mountains to protect animal habitats, plant trees, maintain trails and more. Some interesting game mechanics that have been employed to increase the social element and make the campaign more viral are socially sharable national park postcards and players being able to share their in-game accomplishments. That way designers motivate players to spread the word about this nationwide problem the U. S. faces and motivate their friends and family to also take part in the game and volunteer. To summarise, i think that Save the Park is a great idea for a game that engages the younger generations that nowadays is hard to be engaged through traditional media like television or the printed press. Gamification is also a great tool to use in the green growth - sustainability field. We have been talking about it alre﻿ad﻿y  and now we try and motivate people to start using gamification in projects that are about being a more green business. I personally hope to see more projects like this in the near future!

If you see any gamification projects that are about sustainability or green growth please tweet them to me at @v_gkogkidis!