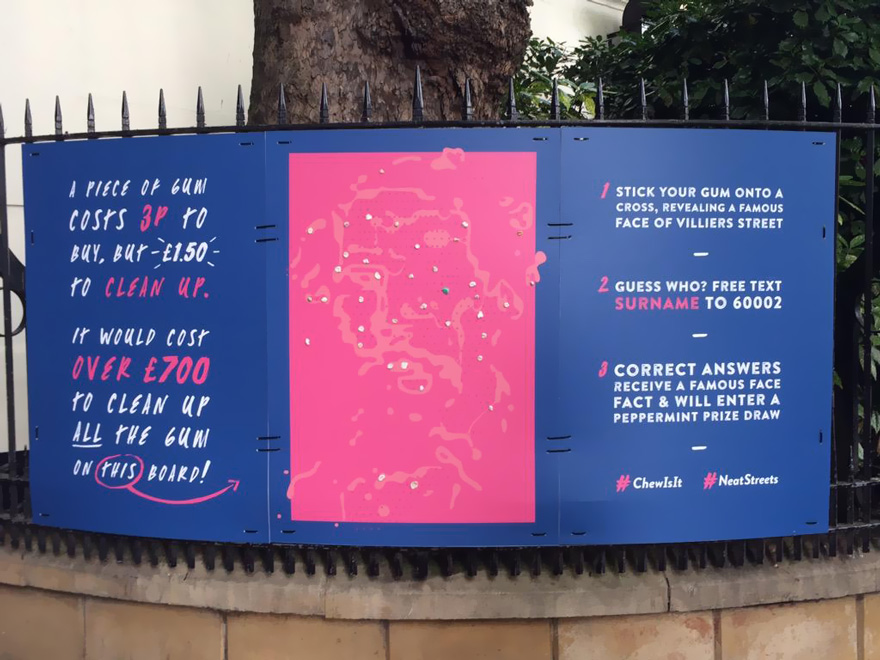 Today I want to talk to you about a gamified campaign that aims to change the way people think about public space. An organisation in the UK called Hubbub is trying to motivate people to stop littering the streets of London by giving them small gamified projects spread across the streets of London. What this is, is a way to motivate people not to throw their cigarettes on the street. You have a box where people can vote who is the best player in the world. To do that they stub their cigarette out and throw the butt in one of the two holes depending on who they want to vote for, Cristiano Ronaldo or Lionel Messi.

Using a bit of competition, designers motivate people to not throw their cigarettes on the street and they try to change behaviour of smokers.

Then we have the stick your gum boards, where citizens are motivated to not throw their gums on the street. Boards have been put up where people can stick their gum and reveal various images like how much it costs to clean gum from the streets of London every year. Designers here use curiosity as a tool to motivate people to read the signs and understand how big the problem really is. After all it’s the citizens that pay for cleaning the gums with their taxes.

Our favourite stick your gum board was the one below where people have the chance to win a prize! After they stick enough gum on the board they will reveal the face of a famous Londoner they can text his surname and enter a lottery to win a prize. That board introduces the element of luck through the lottery which always fascinates a lot of people. I really believe that this is a campaign using gamification in a great way. They use just enough game mechanics to engage and motivate people without turning the whole experience into something very complicated but still exciting.

We have been saying that repeatedly, gamification does not need to be big or expensive, it needs to be just enough. It’s not using as many game mechanics as possible but about using enough to achieve the project’s goals.